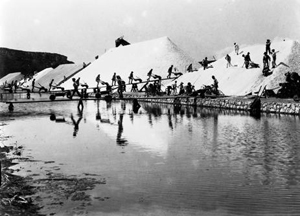 The history of salt, an ancient, precious element, mirrors that of salt works and salt mines, of the fleets that crossed the seas and the caravans that travelled up the rivers of Europe, Russia, China and America. It tells of ties between cultures and countries capable of producing enough salt to export it to countries where it was in short supply.
In centuries past, salt could be more precious than gold. Salt created trade, supported currencies, led to the levying of taxes and the outbreak of wars.
This is why, since ancient times, monopolies have been developed to control domestic price levels, to regulate the revenues of middle-men and to tax them.
In Italy, the salt tax was collected by revenue agents holding exclusive concessions and through the charging of duties on imports. The salt tax was abolished in 1975, and with it the monopoly system, which, years earlier, has ceased to serve as an important source of tax revenues, representing, instead, a commitment on the part of the State to ensure a widespread, low-priced supply of a staple consumer product. 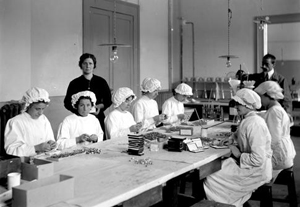 Quinine is extracted from the bark of a Peruvian tree: when finely ground, the bark produces a powder whose properties in curing fevers were widely used by the Indians of the Americas.
Quinine was imported to Europe around 1640 and used in therapies against fever and malaria.
During the 18tn century, the use of quinine to cure fevers, and to treat chronic fevers in general, was widespread, remaining so in the century that followed as well.
The high cost of labour made it difficult for those suffering from malaria to buy quinine: in the early 1900's. approximately 15,000 people died of malaria in Italy each year.
With this in mind, the State established low-cost sale of quinine, in addition to making the quinine treatment of workers in "malarial zones" obligatory; starting in 1901, quinine was also sold in the stores licensed by the tobacco monopoly.
The original headquarters of the "State Quinine" Monopoly was in Turin, where the factory was also located. 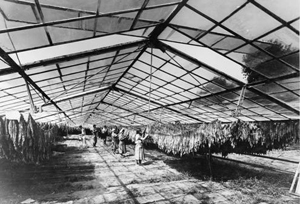 Originally found in America, tobacco was introduced into Europe around 1520, first as an ornamental plant.
It was later used for medicinal purposes, and not until the early 1600's did the custom of smoking tobacco leaves in different forms come into vogue, resulting in the development of tobacco growing and the first production facilities.
In a number of countries, tobacco smoking was initially fought with laws and restrictive edicts, but governments soon found it to be more advantageous to establish a monopoly over tobacco and use it as a source of revenues.
In Rome, the first Papal tobacco factory was built by Pope Benedict XIV in the middle of the 18 century, on the Via Garibaldi, in order to use the significant flow of water from the Acqua Paola fountain on the Janiculum hill above the plant to power it.
In 1863, a new Tobacco manufacturing complex was completed in the Piazza Mastai, where the General Directorate of the AAMS is currently headquartered.